In Elizabeth's England there is no greater crime 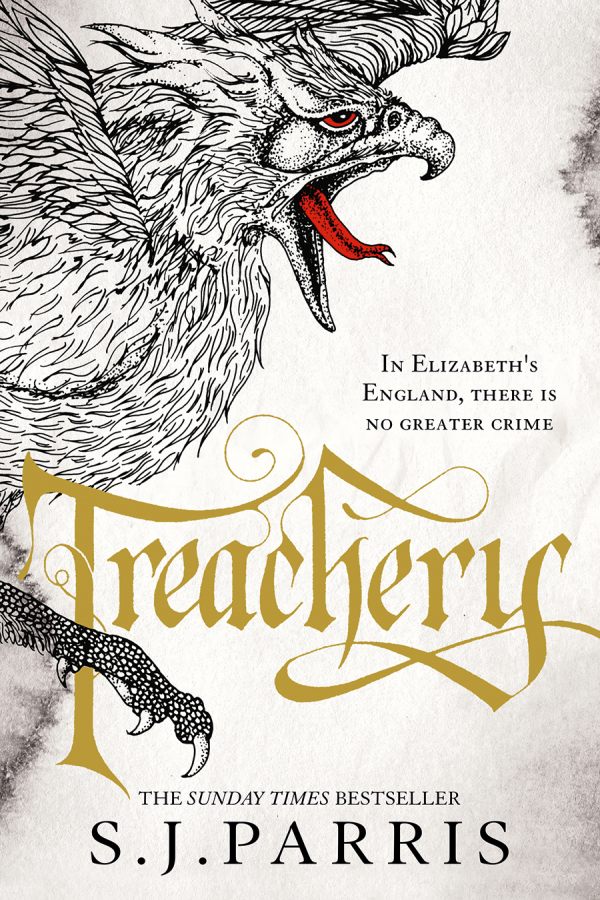 August, 1583. Giordano Bruno, a heretic fleeing the Inquisition, finds a new life working as a spy for Sir Francis Walsingham.

Along with his friend, Sir Philip Sidney, Bruno travels to Plymouth on the Queen’s behalf. There, they meet Sir Francis Drake, who is preparing to launch a daring expedition against the Spanish, which could turn the tide of war.

Unbeknownst to Bruno, however, Sidney plans to stowaway with Drake’s fleet and return a hero – dragging Bruno with him to the New World. But when a murder occurs aboard Drake’s own ship, fear and suspicion grip the fleet and threaten to abort the expedition before it begins.

Navigating the jealousies and loyalties of the crew, Bruno learns that someone with a deadly grudge is shadowing his investigation.

Tracking the killer through Plymouth’s menacing backstreets, he uncovers some of the darkest secrets the city is harbouring. Failure will come at the highest cost – not just for Bruno, but all of England...

From aboard Her Majesty's good ship the Elizabeth Bonaventure, Plymouth, this Sunday the twenty-second of August 1585

After my heartiest commendations to you, Master Secretary, it is with a heavy heart that I pick up my pen to write these words. You have no doubt expected fair news of the fleet's departure by now. It grieves me to tell you that we remain for the present at anchor here in Plymouth Sound, delayed at first by routine matters of supplies and provisioning, and awaiting still the arrival of the Galleon Leicester to complete our number, which we expect any day (and with it your son-in-law). Naturally, in a voyage of this size such minor setbacks are to be expected. But it is a far graver matter that weighs upon me now and which I feel I must convey to Your Honour, though I ask that for the present you do not reveal these sad circum-stances to Her Majesty, for I hope to have the business resolved before too long without causing her unnecessary distress.

Your Honour perhaps knows, at least by reputation, Master Robert Dunne, a gentleman of Devon, sometime seen at court, who proved a most worthy officer and companion when I made my voyage around the world seven years since, and was duly rewarded for his part in that venture. I had invited Dunne to join my crew for this our present voyage to Spain and the New World, though there were those among my closest advisers who counselled against it, given the man's personal troubles and what is said of him, which I need not elaborate here. Even so, I will not judge a man on hearsay but on his deeds, and I was determined to give Dunne a chance to recover his honour in the service of his country. Perhaps I would have done well to listen, though that is all one now.

From the outset Dunne's manner was curious; he seemed much withdrawn into himself, and furtive, as if he were afraid of someone at his shoulder, not at all the man I remembered. This I attributed to nervous anticipation of the voyage to come; to leave home and family for the far side of the world is not a venture to be undertaken lightly, and Dunne knew all too well what he might face. Last evening, he had been ashore with some of the other gentlemen. While we remain here in harbour I consider it wise to allow them the natural pursuits of young men and such diversions as Plymouth affords the sailor – there is time enough for them to be confined together below decks and subject to the harsh discipline of a ship's company once we haul anchor, though I make clear to the men under my command – as do my fellow captains – that they are expected to conduct themselves in such a way as will not bring the fleet into disrepute. Dunne was brought back to the ship last night very much the worse for drink, which was also out of character; God knows the man had his vices, but I had confidence that drink was not among them, or I would not have appointed him to serve with me on Her Majesty's flagship. He was in the company of our parson, Padre Pettifer, who had found Dunne wandering in the streets in a high degree of drunkenness and thought best to bring him direct to the ship – a decision I would not have made in his position, for I am told they had the Devil's own work to help Dunne into the rowboat and up the ladder to the deck of the Elizabeth. There they were met by my brother Thomas, who had taken his supper with me aboard and was on his way back to his own command. Knowing I was in my quarters, at work on my charts with young Gilbert, and thinking this matter not fit to trouble me with, my brother and the parson helped Dunne back to his cabin to recover, though Thomas later said Dunne appeared very wild, lashing out as if he could see enemies invisible to the rest, and addressing people who were not there, as if he had taken something more than wine. But, according to Padre Pettifer, almost the moment he lay down upon his bunk, he fell into a stupor from which he could not be woken, and so they left him to sleep off his excesses and repent of it in the morning.

What happened between that time and the following dawn is known only to God and, it grieves me to say, one other. The weather was foul, with rain and high winds; most of the men were below decks, save the two who kept the watch. At first light, my Spanish navigator, Jonas, came knocking at my door, in a fearful haste. He had tried to take Robert Dunne a draught of something that would restore him after the night's excesses, but the cabin was locked and Dunne would not be roused. I understood his concern – we have all seen men in drink choke on their own vomit unattended and so I went with him to see – I have a spare key to the private cabins and together we unlocked Dunne's door. But I was not prepared for what we found.

He was facing away from us at first, though as the ship rolled on the swell, he swung slowly around, and it was then that I noticed – but I run ahead of my story. Dunne was hanging by the neck from the lantern hook, a noose tight around his throat. Jonas cried out, and spilled some of the philtre he was carrying. I quickly hushed him, not wishing to alarm the men. With the door shut behind us, Jonas and I lifted Dunne down and laid him on the bunk. The body was stiff already; he must have been dead some hours. I stayed with him and sent Jonas to fetch my brother from his own ship.

The death of a man by his own hand must be accounted in any circumstances not only a great sorrow but a great sin against God and nature. I confess that a brief anger flared in my breast that Dunne should have chosen this moment, for you know well that sailors are as devout and as superstitious as any men in Christendom, and this would be taken as an omen, a shadow over our voyage. I did not doubt that some would desert when they learned of such a death aboard, saying God had turned His face from us. Then I reprimanded myself for thinking foremost of the voyage when a man had been driven to such extremes of despair in our midst.

But as I waited for my brother to arrive, my anger gave way to a greater fear, for I looked more closely at the corpse and at once I realised what was wrong, and a great dread took hold of me. I had no need of a physician to tell me this death was not as it first appeared. And so you will understand why I confide this to Your Honour, for I must keep my suspicions to myself until I know more. If a ship should be considered cursed to count a suicide on board, how much the worse to harbour one guilty of an even greater sin?

For this reason, I ask you for the present to keep your counsel. Be assured I will inform you of progress, but I wanted Your Honour to have this news from my own hand – rumour will find its way out of every crack, often distorted in some vital particular, and as I know you have eyes and ears here I would not wish you to be misinformed. It has been given out among the crew that it was self-slaughter, but there must be a coroner's inquest. You see that I cannot, with due care for my men and the investment of so many great nobles, including Your Honour and our Sovereign Queen herself, embark upon a voyage such as this believing I carry a killer among my crew. If Her Majesty should hear we are delayed, I pray you allay any fears for the success of the expedition and assure her we will set sail as soon as Providence allows. I send this by fast rider and await your good counsel.

I remain Your Honour's most ready to be commanded, Francis Drake

'There are echoes of CJ Sansomâ€™s Shardlake series here. But Parris is better than the usual run of imitators. Her prose is taut and compelling. Her wielding of the historical material is always convincing but never overwhelming'

'Parrisâ€™s Giordano Bruno series has been a joy. Her Elizabethan England is loud, pungent and blessedly free of some of the genreâ€™s more egregious clichÃ©s. She wears her research lightly: at home with the detail of the period, she is quite happy to engage in a little creative anachronism to bring the story home'

'An evil bookseller and a terrifying brothel lie ahead; whatâ€™s not to like? Gripping and fun'

'With its twisting plot and vivid scene-setting, TREACHERY confirms Parrisâ€™s growing reputation as a writer of historical thrillers'

'Hugely enjoyableâ€¦ Itâ€™s played straight, but never humourlessly so, and thereâ€™s just enough â€œproperâ€ history amid the intrigue to keep purists on side'