Stephanie started reviewing books professionally while reading English at Queens’ College, Cambridge. After graduating, she became Deputy Literary Editor of The Observer in 1998, where she also wrote features across most sections of the paper (even Sport and Motoring, about which she knows almost nothing). In 2005 she left the desk job to become a full-time writer, and has written for The Times, The Daily Telegraph, The Guardian, the New Statesman, Red, Grazia, Marie Claire, New Humanist and the TLS, as well as continuing to contribute regularly to The Observer.

Her first novel, Gaveston (Faber), was published in 2002 and went on to win a Betty Trask Award. She followed it with Real (Faber) in 2005, which she adapted for film for Gabriel Byrne’s production company, and her first non-fiction, The Devil Within (Vermilion), a memoir of depression and recovery that was shortlisted for the 2008 Mind Book Award.

In 2008 she decided to combine two of her literary passions, history and crime, and started writing Heresy (HarperCollins), the first in her series of historical thrillers under the pen-name S.J.Parris, featuring the 16th century heretic philosopher and spy Giordano Bruno. It was published in 2010 and was followed by Prophecy, Sacrilege, Treachery and Conspiracy, and a novella, The Secret Dead. The books have been Top 10 bestsellers in the UK and Canada; Heresy was a New York Times bestseller in the US, and the series has sold into 20 countries including Turkey, China and Brazil. Heresy, Sacrilege and Treachery were all shortlisted for the CWA’s Historical Dagger Award.

Stephanie is also a regular speaker and chair at literary events, including the Hay Festival, Edinburgh Book Festival, the National Theatre, Foyles, the British Library, Guardian Live and the Southbank Centre. From 2007-8 she curated and produced the Talks and Debates programme at Soho Theatre. She has been a judge for the Perrier Comedy Award, the Orange New Writing Prize and the Costa Book Awards. She is a frequent contributor to Radio 4’s Front Row and Saturday Review and occasionally pops up on TV, usually talking about books. When she’s not reading or writing, or talking about reading and writing, she likes going for long walks, and once walked 192 miles right across England, which she shows off about at every opportunity. She lives in Surrey with her son. 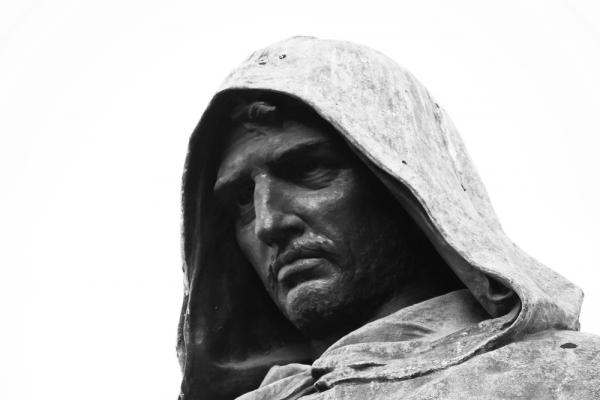 Some thoughts about Bruno and what it means to be European

S.J. Parris talks about her inspiration and research for Heresy

HistoricalNovels.info interviews the author of Heresy

Why do you write the Bruno series under a pseudonym?

It was mainly because I knew the series would be a departure from the kind of books I had written before – two contemporary novels and a memoir. I hoped it would be an ongoing project so I wanted a way of marking the fact that the series would be a particular type of story – that when readers saw the SJ Parris name they would know to expect a historical crime novel. That way, if I was suddenly seized by the urge to write a ghost story or a romantic comedy, I could do it under my own name and allow the series to build its own readership. There’s a good precedent for it – Julian Barnes, John Banville and Ruth Rendell, among others, all use pseudonyms that allow them the freedom to write in a different genre.

Have you always been fascinated by the Tudor period?

Since I can remember! When I was about 6 or 7, my mother had an illustrated History of Britain that had a picture of Mary, Queen of Scots being beheaded, and I was obsessed with looking at that picture and the story behind it. I was probably quite a gruesome child. I remember visiting Hampton Court as a child and being gripped by the story of Henry VIII and exploring all the old courtyards – the Georgian bits didn’t fire my imagination in anything like the same way (sorry Georgians). At university I specialised in medieval and Renaissance literature and got to know the writers of the Tudor period, which was how I discovered Bruno’s story. For a while I was tempted to go into academia in that area, so I think I always had a desire to write about that era in some form. But I’m glad I found a way back to it through fiction – it’s a lot more fun having the freedom to imagine myself into that world.

How much research do you have to do for each book?

I spent a lot of time before I began the series reading about Bruno’s life and writing and the background of European history that informed what happened to him. He’s not very well known in England (though much more famous in Europe) but as a result there weren’t many biographies of him in English and not many of his books in translation. In a way that’s a gift to a novelist, since there are plenty of gaps to fill in with the imagination. Fortunately, the Tudor period is very well documented, and there are some excellent biographies available for the real-life characters Bruno would have met – Philip Sidney, Francis Walsingham, John Dee, Elizabeth I, Catherine de Medici and others, so a lot of the historical detail comes from those.

I begin each book with the idea of where Bruno was at that time, who he might conceivably have met, and then work out how a murder investigation might fit into that. Then I research the place as much as I can, spending time there and trying to find old maps, which I’m obsessed with. This is much easier in places such as Oxford and Canterbury, where so much of the city still looks as it would have in Bruno’s time; less so with London and Paris, where it really takes some work to picture how the vanished 16th century streets might have appeared.

How much do you make up?

I think I’ve got better at giving myself permission to invent more, and not to worry that the novels must stay obsessively faithful to historical events. That doesn’t mean taking liberties with facts, but it does mean allowing myself to be a bit more flexible in terms of what serves the story best. The historical detective story is an anachronistic genre in the first place – investigating a murder was a very perfunctory business up until the nineteenth century, so I think of the kind of books I write as slightly different from the novels of, say, Hilary Mantel or Sarah Dunant, because I’m having to think of what will serve a crime plot rather than a straight rendition of historical events. I don’t falsify historical events and I try to ensure that the background detail is as accurate as possible. I think if you have a strong scaffolding of truth underlying the story, then you have a bit more flexibility to build fiction on top.

You’re both a novelist and a journalist. How does your journalistic work inform or impact your fiction?

I’ve been a journalist for 15 years and in that time I’ve been privileged to interview a great many creative artists in all disciplines. More than anything, I think that has given me an appreciation for the sheer hard graft that goes into the creative process. When I feel I’m flagging with my own novels, I think of all the authors, playwrights, actors, directors and musicians I’ve talked to over the years and how every one of them that has enjoyed some success had to put in hours, sometimes years, of often lonely hard work – I do find that inspiring on the off days!

Being a journalist also taught me how to research thoroughly, which is very useful with historical fiction, though the great joy of writing novels is that you are free to stray away from the facts.

I think that writing fiction of my own has made me a more generous book reviewer, because I know what it’s like to be on the other side.

Tell us about a book you read in the past few years that had a lasting impact on you.

The books that have had by far the greatest impact on me in recent years are Hilary Mantel’s two Booker-winning novels about the life of Thomas Cromwell – Wolf Hall and Bring Up the Bodies.

I don’t think it’s an exaggeration to say that these books have changed our perception of what the historical novel can do.

She has given muscle and weight to a genre that can often be perceived as rather twee; these books are visceral and immediate, you live through every scene with the characters.

And the repercussions of what went on in the reign of Henry VIII are still being felt during the period I’m writing about, so it’s interesting to me from that point of view as well.

What is your idea of a perfect day?

A perfect day for me would involve a walk in the countryside with my son, a pub lunch with friends, a lazy afternoon reading in the sun and a good film in the evening. It’s the small things that really make us happy – I’m figuring this out as I get older…

Finish this sentence: They keep telling me that…

They keep telling me that… the novel is a dying form, but I don’t believe it. People may be experimenting with different ways to access stories – ebooks, audiobook downloads etc – but it’s clear to me that there’s still an enormous appetite for good storytelling in whatever form, and more ways for people to get their stories to connect with readers, which can only be a good thing.

The series of books you are currently working on are set in England in the 1580s. What is it about this period that appeals to you?

The 1580s, halfway through Elizabeth I’s reign, are a fascinating moment in English and European history. England is very new as a Protestant nation and the great Catholic powers in Europe, France and Spain, don’t really expect it to last; there are constant threats of invasion.

It’s a period rich in intrigue, which saw the beginnings of modern espionage; Catholic spies and secret priests are all over the country and there are countless assassination plots against the Queen. There’s plenty of scope in such an atmosphere of paranoia and treason for novels that draw on murder and spy plots.

My main character, Giordano Bruno, is himself a strange hybrid: he’s an ex-monk, excommunicated by the Catholic Church for heresy, working as a spy in England, so this gives him an unusual perspective on both sides.